Set up your RPG Campaign details in vimwiki

I found this Getting started with Vimwiki blog post by Chris Mague a good and thorough guide to the installation and use of vimwiki. So, I will shamelessly emulate his approach and put together a similar guide for anyone who seeks to install and use vimwiki for RPG campaign detail management.

The goal of this document is to install vim, configure vim, and set up a pair of vimwiki installations. One vimwiki is labelled vimwiki and contains information for both players and the Gamemaster. The second wiki labelled private contains information intended only for the Gamemaster. The second wiki links to the first. There are no links from the first (public) wiki into the second (private) wiki.

Everything after this assumes 1) you have already installed vim and 2) you are familiar with using vim.

If you run Mac OS X, you will probably prefer to use MacVim rather than fire up Terminal (or iTerm2) and work with vim inside the Command Line Interface (CLI).

If you run Linux yet the gvim command does not work, you probably want to install vim-gtk or vim-gnome or a similar variant to get a vim GUI.

If you have vim, but you would appreciate a tutorial, try vimtutor. On Linux, you can install vimtutor with yum install vim-enhanced (RedHat) or apt-get install vim-runtime (Ubuntu)

If you have questions, one place to find answers is the vi and vim site on the Stack Exchange collection of sites.

Without them Vimwiki will not work properly.

The git archive does not work

If the git archive does not work, there's a vimball from 2013 on vim.org. Download this, and unpack it as says on that page:

Vundle is a plug-in manager for vim. The Getting started with Vimwiki blog has details about how to add both vimwiki and the Calendar plug-ins. The short summary:

You now have two wiki installations, the first labelled vimwiki and the second labelled private 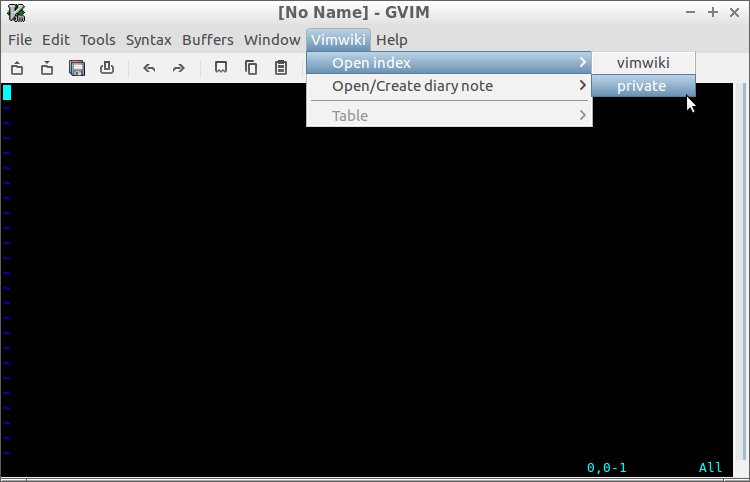 Figure One: Vim with vimwiki menu links and an otherwise empty screen 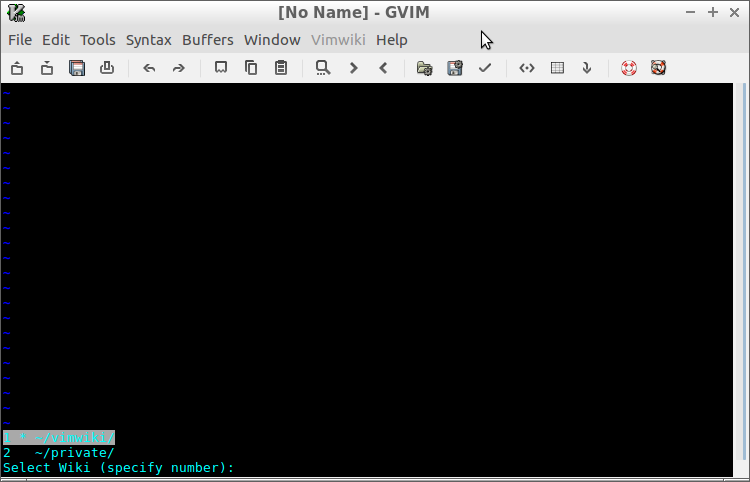 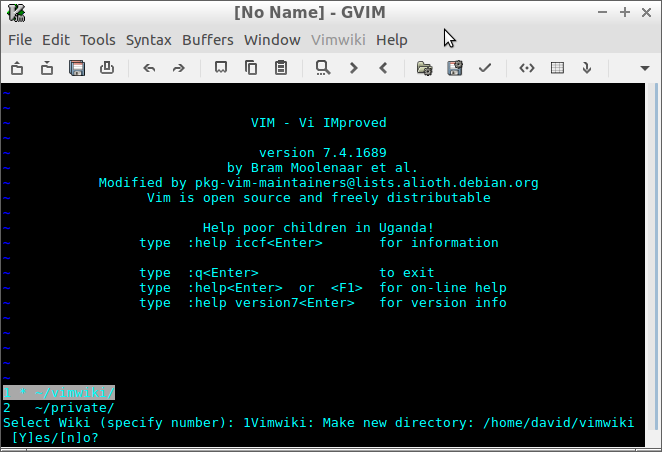 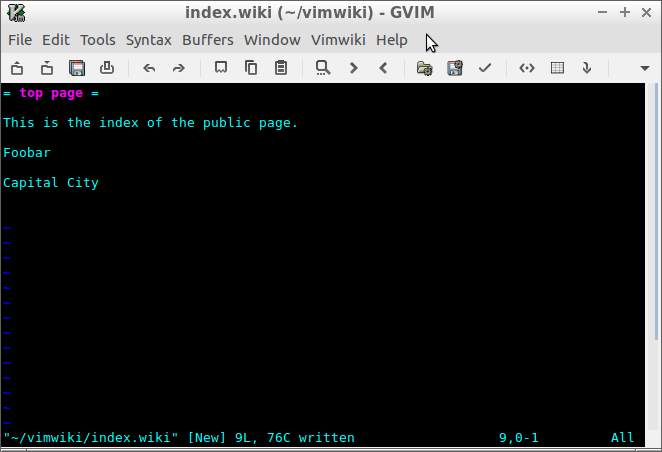 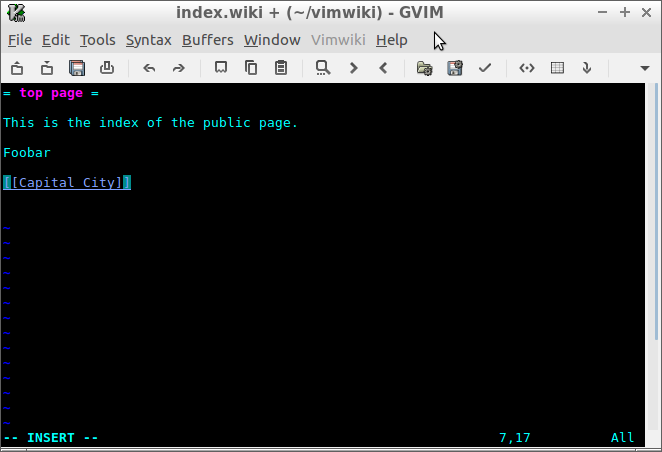 Figure Five: Create a link from the text 'Capital City'. 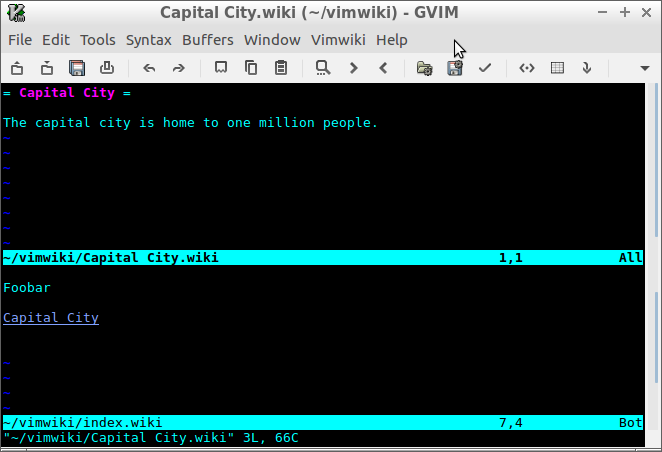 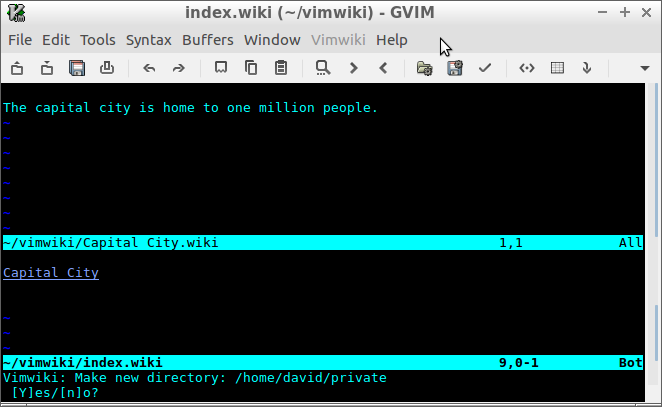 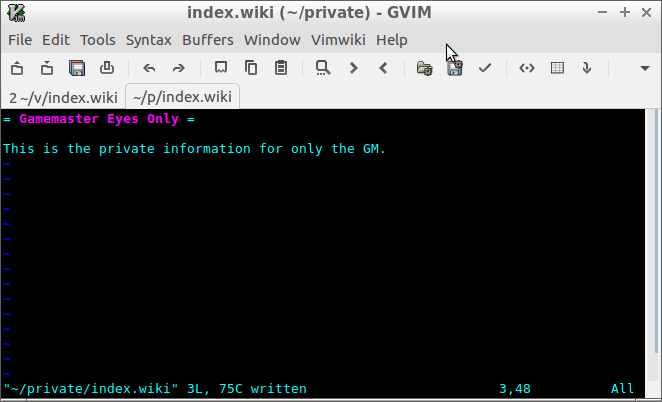 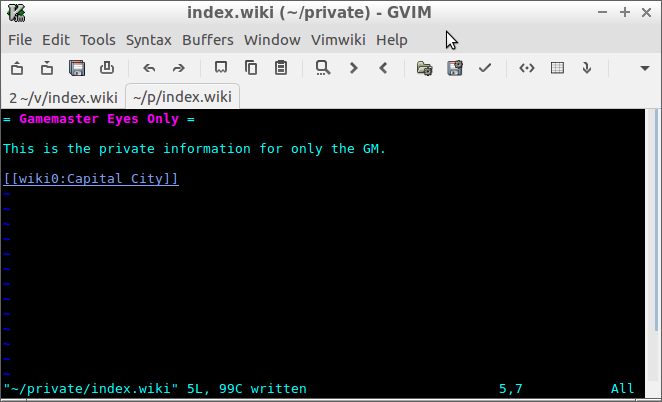 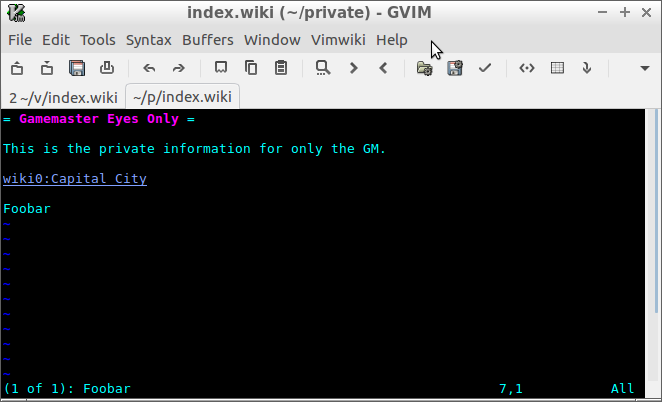 The assumption here is that your <leader> key is set to ("\") 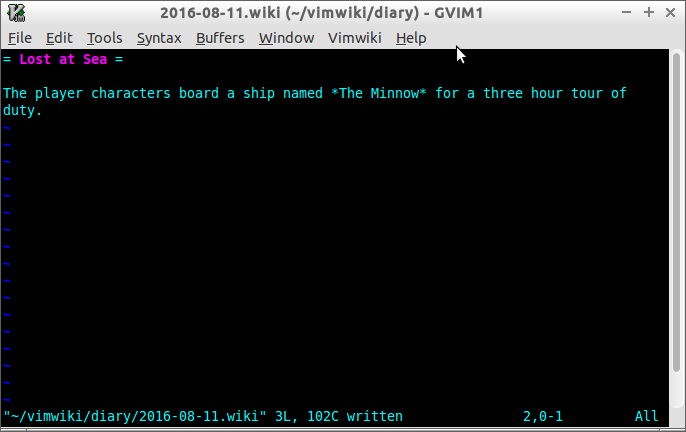 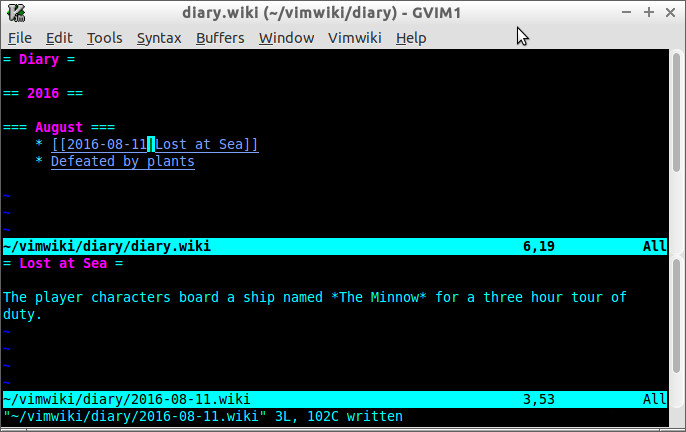 Figure Twelve: Update the links to all chronicle entries

Posted by standardeyre at 23:02 No comments:

I will run a campaign for friends in the coming months. A big campaign.

This idea is fraught with peril for several reasons. The first two that come to mind:

This means I need a tool that can keep track of a large number of details.

It'd be best if those details are stored in plain text. That way I can search the content quickly using existing tools. Storing those details in a specific binary format or a database locks the details down and makes transformation a challenge.

Those details are to be shared. Descriptions of people, places and things in the campaign are meant to be shared with the players. I like the idea of putting together electronic books and sharing the details in one unified book with an edition date. Most of my players can use the Apple offering iBooks which means ePub format, but one or two will probably prefer to use Kindle which means either MOBI or KF8 format... maybe both.

It might be easier to put all those details up into a wiki like Mediawiki, and access those details through the Internet. The Mediawiki allows collaborative editing which I want for my players (assuming my players have the time to add details! Everyone gets so busy....) This assumes we'll always be gaming somewhere with Internet access.

Paper handouts of non-player character details could come in handy. That means transforming text into PDF format. Any sort of positioning of those details needs some sort of word processor or layout tool. If I have to make one single handout I could put the details in Pages or OpenOffice or something else, but if I have to make three or more I would look at wrapping the details in LaTeX and transforming those files to PDF.

That sounds like a number of different formats. Plain text also lets me transform and format the content quickly.

I could try hiding some of the Gamemaster details in comments, but I don't trust that I can keep commented details secret and/or up-to-date. I'd work with more confidence if I had all the game master secret details secured in a special secure location. The default is public. Anything not secured is assumed to be public details in a collection the player characters can (and hopefully will be excited to) look at.

Vimwiki will store all the details in plain text files. This means I can subsequently use pandoc to group a dozen of those files together and transform that group into one electronic book in ePub format. Pandoc can also transform text into PDF.

Plain text files means that the wiki can be stored in git. Stored in git means version control and distributed copies (also known as backups). It might not be a big selling feature for most people, but my use of plain text files also means I'm not tied to a vendor or a cloud. I don't have to worry about Obsidian Portal going offline, or running out of disk space on Google Drive nor iCloud nor Azure. I don't have to fear that the Internet connection is down; I can make a backup locally or to the cloud.

Vimwiki can manage two wiki installations: one for the GM and a second one for the public player information. Details can be cross-linked between the two wikis, so the GM wiki can link to the public site without dropping too much information. I heard about this first on a reddit post.

There are tools to sync files to and from a Mediawiki site. Vimwiki has its own wiki syntax, but it also has an option to use the Mediawiki syntax. So, the player wiki will be set up with Mediawiki syntax and the files posted to the public Mediawiki. You might be reading this and thinking "How are you going to keep the two in sync?" Given how busy my players are with other tasks, and given that there might be a dozen people globally that want to contribute to this wiki, I do not foresee a locking nor a synchronization issue.

Vimwiki has a diary function. I'm not one for "Dear Diary: today I plan to take over the world!" type entries. However, the diary function is a great way to open a new file for today, jot down some half-baked thought, then continue. Those half-baked ideas can be stored, searched days later, then pulled into either of the first two wiki installations.

Another term for diary is chronicle. The diary of the public wiki can be used for the chronicle of what the players encounter. 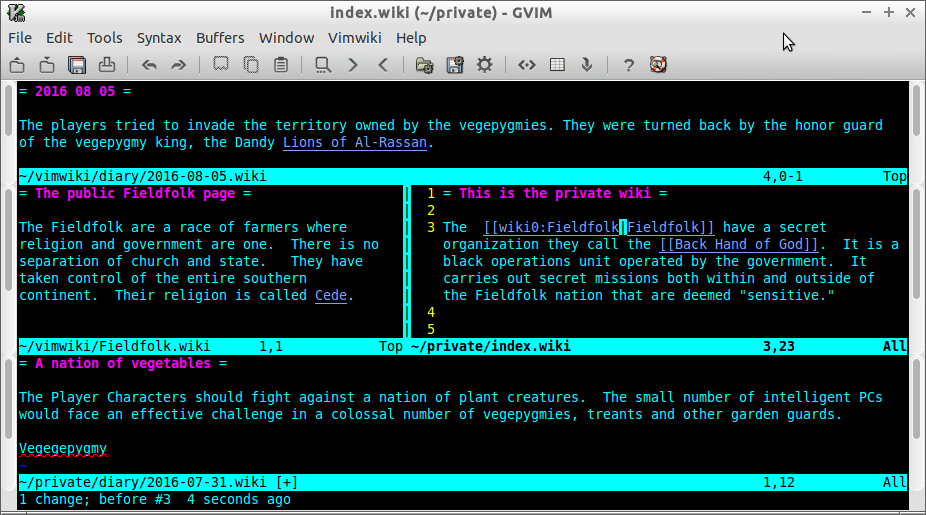 The example above has one gvim instance open with four windows in that instance.

The top row has one entry for the public vimwiki. The path is~/vimwiki/diary/2016-08-05.wiki and the entry shows a public chronicle of what the players did. Better luck against the vegepygmies next time, players!

The middle row is divided into two columns. The column on the left is the public wiki page for a race of creatures known as Fieldfolk. The path to the file is ~/vimwiki/Fieldfolk.wiki and that page has one visible link to a second public wiki page where the link text is Cede.

The column on the right has line numbers showing, lines 1 to 5. The cursor is on the middle of a link in line three, on the pipe | character that separates the link on the left from the link text on the right. This is an example of the private wiki linking to the public wiki (the Fieldfolk.wiki page in the left column). The file is in the private wiki as shown by the path ~/private/index.wiki

The third, bottom, and final row has a link to the diary of the private wiki, which I'm using as a "Gamemaster's journal for raw notes." The path to the file is ~/private/diary/2016-07-31.wiki and the file has been modified but not saved (as indicated by the plus sign to the right of the file path name). I've also mis-spelled the word "vegepygmy" to show that the spell check is working and has highlighted the mistake.

I used to keep all the reference details for my campaign, something like three hundred names, places and events, in a wiki contained as a separate single HTML file stored on a jump drive. This worked until the browser vendor tightened security and prevented the javascript of the wiki HTML file from working on one OS platform. I moved everything to vimwiki and never regretted it.

Posted by standardeyre at 11:10 No comments: