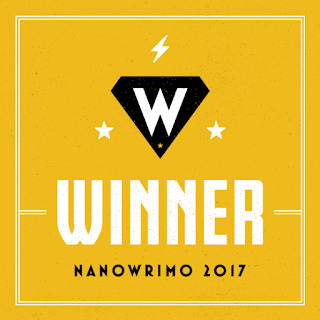 I had a really good time. I thought hard about an outline, I made progress every day, and I have a completed first draft that I really enjoy. It was not easy, fitting the writing of a novel into working full time and raising a family. It was, however, truly rewarding. Now, to take a deep rest, then Christmas. After that: revising and producing the second draft while finding an agent and a publisher.
Posted by standardeyre at 21:56 1 comment:

Why All The Silly

Why All The Silly

Recently I watched Thor: Ragnarok in the cinema with my family. I am a fan of the Marvel movies and I enjoyed this movie the best of them all.

I met a good friend of mine a few days later for dinner. He told me that while his wife and daughter went to the film, he decided to skip it because, as he put it, he "thought it looked too silly."

His comment surprised me in three directions. For one, I began to wonder what a Serious Super Hero Movie looked like. I guess that would be Batman: The Dark Knight by Christoper Nolan. Or the Daniel Craig set of James Bond movies, like Skyfall or Spectre.

For another direction, I wondered about the campaign style I run, and what this friend and the other participants must think of it. My campaign setting is called "County Playground." It is not called "The Suffering of Carlos the Grim on His Descent Into Hell." I'm trusting that at least one of the players will give feedback when I ask for it. I have asked for feedback, and no one has said, "Too Silly. Dial it back."

For a third, I am really enjoying the novel I am writing for National Novel Writing Month. It is not a "GrimDark" tale. It is an adventure comedy in a fantasy setting. When I have bad days, I wonder how it will sell. When I have good days, I ignore whether it will sell or not, and just write.

I can appreciate A Song Of Ice And Fire and the moody television it inspires. Myself, I like to use my free time to make stories and role playing game (RPG) campaign settings where the plot, tone, and characters promote laughter, not weeping. Although to be honest, some of the puns do evoke tears.

I read an interview with Taika Waititi, director of Thor: Ragnarok, and thought he said it best:

The directors words are on my mind, when I get inspired by Kings Of The Wyld and Galavant, and when I work on my own creative pursuits.

Posted by standardeyre at 13:49 No comments: